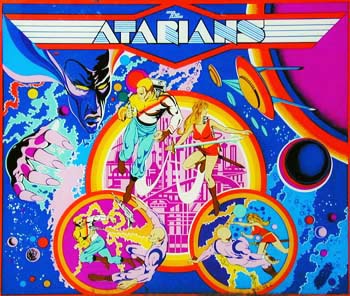 The Atarians was the first arcade pinball machine from Video Game pioneer Atari. It was designed by Bob Jonesi with art by George Opperman, and released in 1976.

As a premiere pinball, The Atarians is notable for some unusual design decisions, such as the two pairs of stacked flippers and the use of inductive under-playfield sensors instead of rollover switches. Unfortunately, anything about the Atarians themselves are lost to the mists of time, as none of the game rules, instruction manuals, or promotional material give any indication as to who they are or what is going on. Who are The Atarians? Why are there two of them? What is the futuristic landscape seen behind them? Who is the long-faced alien with the flaming hair? Why is he blue on the backglass and orange on the playfield? Are those yellow-skinned folks in the purple tights his Mooks or his captors? Why doesn't the female Atarian use her sword? Why are we asking all these questions?

The world may never know.

Not to be confused with Atari Force.

The Atarians demonstrates the following tropes: