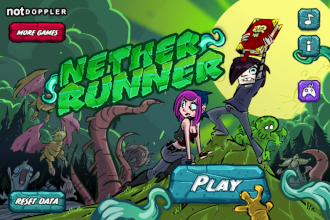 Nether Runner is a 2D web-based Endless Running Game with Shooter elements developed by Morbidware in 2014.

In this game, players take on the role of a goth teenager who accidentally released the horrors of the Netherworld onto Earth. It's up to him to save mankind and his really angry girlfriend from the hordes of supernatural forces. Thankfully, he has the help of a Tiny God, an Evil Book, and a small arsenal of deadly spells.

This game can be played for free here