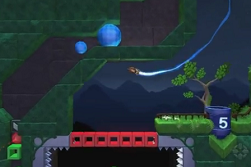 At typical level; A mishmash of various genres.
Advertisement:

, Nimbus is a game on the PC that mixes aspects from a variety of games, including red, blue, and yellow (and green) color switch puzzles, color coded portals, racing against deadly obstacles at times (and the clock, if you're aiming for the quickest times), barrel cannons, physics puzzles, and secret stage exits, among other things. The objective of each stage is to solve various puzzles as quickly as possible without becoming stranded the ground nor running into a dangerous obstacle. The ship does not propel itself in any way. The player will need to find ways to accelerate to gain/maintain height and speed whilst avoiding (most often lethal) traps or bumping into walls, which will considerably decrease their speed.

In short, Nimbus can be described as a Puzzle Platformer, except without the platforming, instead relying on gliding mechanics.

There is an online leaderboard for players who enjoy competing for the lowest possible times.

Reviews for this game

have been very positive and there are many plans

for this game's future. It can be purchased from Steam for $10

. There is also a downloadable demo for those who want to try the game out first.