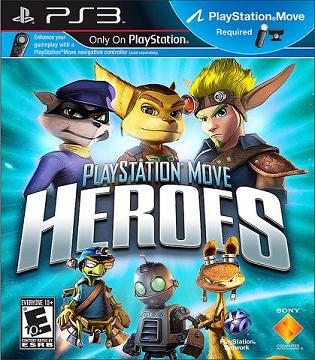 A Massively Multiplayer Crossover between Sony's unofficial mascots: Jak and Daxter, Ratchet & Clank, and Sly Cooper, with his buddy Bentley. It was developed by Nihilistic Software for the PlayStation 3 and released in March 2011. Watch the trailer here.

The story starts with the heroes being abducted to an alien planet, while someone has "hit pause" on their homeworlds. There they are asked to compete in the very first Inter-Universal Hero Games to determine which of them is the greatest hero. They accept, but quickly become aware there is a bigger plan behind it all.

The game features both single-player and two-player co-operative multiplayer options and requires the Move to play. There are a total of 50 levels, situated in Paris from Sly Cooper, Metropolis City on Kerwan from Ratchet & Clank, Haven City from Jak and Daxter, and Planet X, an original environment created for the game. The actual gameplay consists mostly of mini games such as bowling, throwing and navigating a disc and beating up stuff with a whip.

A question difficult to answer is exactly when this game takes place compared to the continuity of each original series. For example, because Daxter can be seen in his Dark mode it should be after Jak and Daxter: The Lost Frontier, but for some reason only his Dark mode has his pants, and Jak appears as he did in Jak 3.