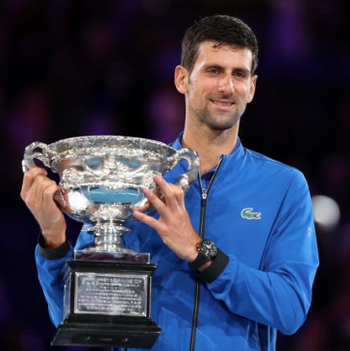 Novak Djokovic (born May 22, 1987 in Belgrade, Yugoslavia) is a Serbian tennis player who's well-known as the "Djoker" who gate-crashed the Roger Federer-Rafael Nadal duopoly in the 2010s and managed to cement himself as one of the greatest male tennis players of all time in the process, despite having to play in the same era as two other all-time greats.

Djokovic won his first Grand Slam at the 2008 Australian Open, but spent the next three years stuck in third-fiddle position to Federer and Nadal who were dominating him and everyone else on the men's tour. 2011 changed everything, as he became the player dominating everyone else by going on a spectacular 41-match winning streak to start the year and ending the year with three more Grand Slams under his belt and the No. 1 ranking wrested away from Nadal who he beat in six consecutive finals. This marked the first time in over seven years (since February 1, 2004) that someone other than Federer and Nadal held the ATP No. 1 ranking.

While Djokovic wasn't quite as dominant a force in most years after 2011, with Nadal, Federer, and Andy Murray usurping him at No. 1 for some periods, he still spent over 200 weeks at No. 1 and established himself as one of the most mentally resilient players on tour. 2015 and 2016 were when he had several of his finest achievements: he was so thoroughly dominant in 2015, making 15 consecutive finals and winning 11 of them including three Slams and a record-breaking six Masters titles, that many people consider his 2015 season to be one of the best Open Era seasons ever. He then became the first man since Rod Laver in 1969 to win four singles Slams in a row* So far, the only other men after Laver to win four straight Slams are twin brothers Bob and Mike Bryan, who did so in doubles from the 2012 US Open to 2013 Wimbledon. by winning every Slam from 2015 Wimbledon to the 2016 French Open, also achieving the Career Grand Slam at the 2016 French Open after years of frustrating losses there.

After 2016, Djokovic unexpectedly suffered a loss in form and an elbow injury, and he fell away from the top ranking just as Federer and Nadal were returning back to form. However, keeping in line with his career-long mission to not let Federer and Nadal hog all the glory to themselves, he came back from being ranked as low as No. 22 in 2018 to winning the last two Slams of 2018 and reclaiming the No. 1 ranking. He then started 2019 by winning a record-setting seventh Australian Open and came back from double match point down against Federer to win Wimbledon later that year for his 16th Grand Slam title, confirming that he's still hungry for more success. Djokovic has since run his Slam total to 20, winning the 2020 AO and all of the first three Slams in 2021. The 2021 AO secured him the No. 1 spot through at least March 8, 2021, when he broke Federer's record for most weeks at No. 1, with 311. (He remains #1 through Wimbledon.)