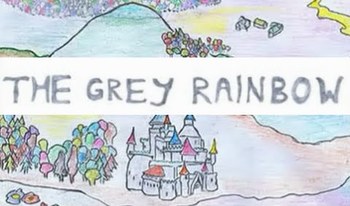 The Grey Rainbow is a 2013 point and click flash game/visual novel based on a short story by Vlatsko, who also did the design for the game.

A detective lives in a dreary, melancholy world where everything is gray, when he's inexplicably spirited off to a colorful world filled with magic, but is close to the same fate as his world, losing its color and magic. Tasked by the queen to speak to the spirit of the mountain, the detective must help to prevent the coming grayness. Along the way, he's forced to ask questions about life and morality as he understands it.