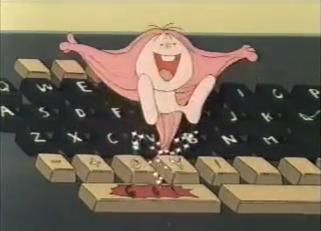 Miimu Iro Iro Yume no Tabi (Miimu: The Various Dream Journeys) is a 1983 educational cartoon made by Nippon Animation and aired on the TBS network, similar in many ways to the contemporary Once Upon a Time... Man and, to a lesser extent, Superbook. Every week a strange creature called Miimunote "Miimu" is the Japanese interpretation of the English word "meme", meaning a "unit of cultural information". is summoned out of a personal computer to narrate the history of an invention or scientific discovery. In the first series, set in the "present day" (for 1983), she is called on by a pair of constantly quarreling siblings, from the second series and onward, set about a generation in the future (again, from 1983), she appears to the members of a Little League baseball team.

The second series introduces, as a regular part of the setting, something it calls "the INS" (short for "Information Network System") — in other words, the Internet — the depiction of which, despite a few Jetsons-esque flourishes, hits far more often than it misses; indeed, it's quite jarringly uncanny to watch it now.