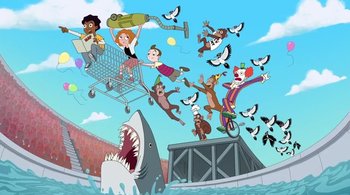 Pictured: what happened at the end of The Woodpecker Incident.
Given that this show takes place in the same universe as Phineas and Ferb, Funny Moments are bound to be inevitable, especially since Murphy's Law is unpredictable.
Advertisement:
open/close all folders
General

Going the Extra Milo
The Undergrounders
Advertisement:
Sunny Side Up
Rooting for the Enemy
The Doctor Zone Files
The Note
Party of Peril
Advertisement:
Smooth Opera-tor
Worked Day
Wilder West
Family Vacation
Murphy's Lard
Secrets and Pies
Acadecamathalon
The Substitute
Time Out
We're Going to the Zoo
School Dance
Battle of the Bands
The Math Book
The Little Engine That Couldn't
The Llama Incident
Missing Milo
Star Struck
Disaster of My Dreams
A Clockwork Origin
Perchance To Sleepwalk
Some Like It Yacht
Backward to School Night
World Without Milo
The Race
Love Toboggan
The Island of Lost Dakotas
Fungus Among Us
Milo's Halloween Scream-a-Torium!
A Christmas Peril