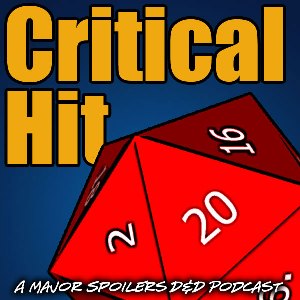 They get them sometimes.

"Until next time, listeners, here's hoping all your dice rolls are... Critical Hits"
— Stephen Schleicher, at the end of each episode
"Uh... whut?"
— Torq

If you came looking for the Game Mechanic which results in high damage, that's over here.

This page is for the Actual Play podcast Critical Hit, a Spin-Off of the Major Spoilers Podcast, in which the hosts and a couple of their friends play in a 4th Edition Dungeons & Dragons campaign. The team is made up of gamers who are completely new to Dungeons and Dragons, those who have been playing since Third Edition, and even one guy who's been playing since the AD&D days. The show itself is a pastiche of learn-by-example play, nerd humor and old-time radio serials.

The main campaign, "Void Saga", follows a Ragtag Bunch of Misfits trying to stop a group of Insane Gods from invading their plane of existence. It started at level 1 and ran several years before concluding in 2020.

The podcast occasionally answers listener questions about D&D or tabletop games in general, and a set of episodes focuses on Game Mastering 101. Between seasons, they often run other game systems besides D&D 4e.

You can find the episodes here

This podcast [rovides examples of:

The plot of the main campaign (called the "Void Saga") follows a Ragtag Bunch of Misfits as they try to stop The Void, a group of Insane Gods, from invading their plane of existence. The first and second seasons had them racing to keep the Moon from smashing into the Earth, and in the third season, they've been recruited by a Higher Power to help cleanse a part of the Astral Sea of the remaining Lunar Monsters. For the fourth season, the party heads to the Feywild, Orem's home plane, in order to restore the balance that was upset by the unnatural lunar activity of previous seasons. The fifth season has them take a detour to the Southern Continent after they discover there's more to their world than just their batch of planes.

The group includes Orem Rivendorn of the Eladrin, Halston Thorkelson aka "Torq", Randus du Thane, and Smith the Sorcerer, who has since been replaced by Ket H'zard the Half-Elf Warlock. In Season Four, they're joined by an elf ranger, Trelle. Season five sees them joined by Little Sparkle and Sekhar Obleea replacing Torq and Trelle.

Modern City Tales
The Major Spoilers crew sits down to play FATE Accelerated for a couple sessions (Episodes 289-305). They come up with "Modern City", a planned community full of superheros.
Yellow Light
Dr. Brad is the GM for a Call of Cthulhu game (Episodes 382-390), set in Hollywood during The Roaring '20s. The player characters recieve a telegram from their Uncle Greyson asking them to meet him in Hollywood, but when they arrive, they're met by police asking if they can identify a body...