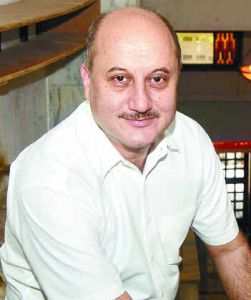 Anupam Kher (born 7 March 1955) is an acclaimed actor in Hindi films in India.

Kher made his acting debut in the 1982 Hindi movie Aagman. Then in 1984 came Saaransh, where he played a late-age retired person having lost his son and never looked back since then. He hosted TV shows such as Say Na Something To Anupam Uncle and Sawaal Dus Crore Ka. He has mainly done comic roles but has done many villain roles for which he got critical acclaim such as Karma (1986) where he played terrorist Dr. Dang. He was applauded for his performance in the film Daddy (1989). Considered one of his best performances, he received the Filmfare Critics Award for Best Performance. Kher is a frequent winner in the Comedian category.

He ventured into directing with Om Jai Jagadish (2003) and is also a producer. He produced and starred in the film Maine Gandhi Ko Nahin Mara (2005). He received the Best Actor Award from the Karachi International Film Festival for his performance in the film.

Kher is known internationally with the films Bend It Like Beckham, Bride and Prejudice, his appearance on the hit TV show ER, and most recently in The Mistress of Spices and Lust, Caution.

He also served as the chairman of the Indian Film Censor Board until recently, when he was replaced by Sharmila Tagore. He is an alumnus of National School of Drama (1978 batch) and later became its director, between 2001 and 2004.