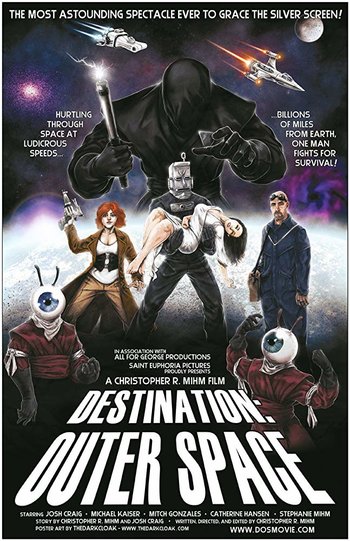 Destination: Outer Space is the fifth film by Christopher R. Mihm and the fifth film in the Mihmiverse Shared Universe. A direct follow-up to Cave Women on Mars, the film continues the story of Captain Mike Jackson.

Set in 1992, five years after the events of Cave Women on Mars, Former Captain Mike Jackson is spending his days drinking and feeling sorry for himself, having been Court-martialed after the events of the earlier film. Luckily, his father, who originally led the railroading against him, had a change of heart and pulled some strings to get Mike reinstated. Unluckily, it was as the test pilot of the E.S.S. Venture - an experimental new spaceship with a faster-than-light speed star drive they aren't sure will work safely.

The good news is the E.S.S. Venture doesn't blow up when the drive is activated. The bad news is that Captain Jackson overshoots the projected target of Jupiter and is stranded in an uncharted section of outer space outside of clear radio contact with Earth. Thus begins a space Odyssey (not THAT one!) as Captain Jackson encounters various strange new life forms as he tries to make his way back home to Earth.