Film / The Monster of Phantom Lake 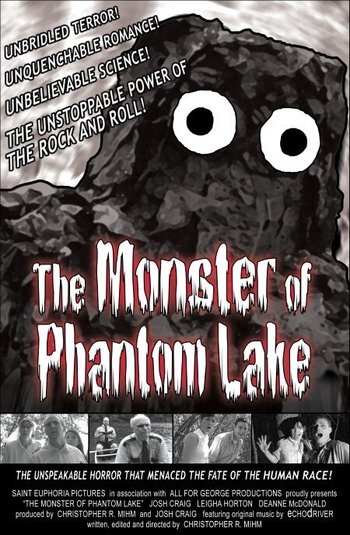 The Monster of Phantom Lake is the first film by Christopher R. Mihm and the first film in the Mihmiverse Shared Universe. It is notable for having established the series' primary setting in southeast Wisconsin and for introducing some of the franchise's biggest running gags, such as the concept of the Phantom Lake Canoe Cops.

The film takes place sometime in the 1950s, near Phantom Lake in Mukwonago, Wisconsin. The movie's opening scene reveals the lake has long been the site of illegal toxic waste dumping. One weekend, Michael "Lobo" Kaiser - a former soldier and local kook - falls into the deadly waters and is transformed into a Muck Monster with a deadly touch. This coincides with two different groups camping by the lake on that same weekend. One is a group of teenagers celebrating their recent graduation from high school. The other is local college science instructor Professor Jackson and his research assistant, Stephanie Yates, who are examining the local animals and discovering some truly frightening mutations.