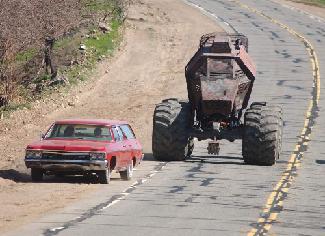 Our heroes try not to become human roadkill.
Advertisement:

Monster Man is a 2003 horror comedy film written and directed by Michael Davis, the same guy who brought us Shoot 'em Up.

Not to be confused with the Syfy reality series of the same name.