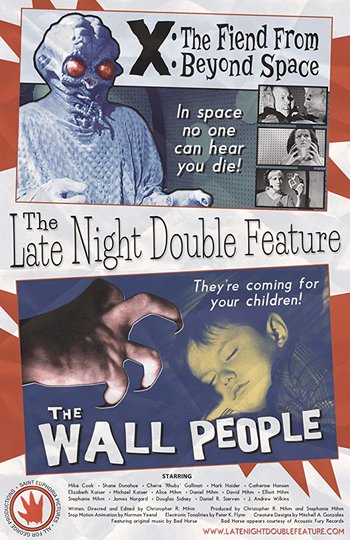 The Late Night Double Feature is the ninth film by Christopher R. Mihm and the ninth film in the Mihmiverse Shared Universe. The film is made up of two smaller features - X: The Fiend From Beyond Space and The Wall People.

X: The Fiend From Beyond Space is set after the events of Attack of the Moon Zombies and features Captain Herman Frehley leading a decades-long mission to Alpha Centauri (started in the year 1981) on the UESPA spaceship Endeavor. The crew emerges from cryogenic suspension 10 years too early to find themselves in orbit around a dead rogue planet in the year 2014. Finding the corpse of a seemingly dead alien on the planet's surface, the crew bring the body on-board only to discover the creature is not quite dead... and hungry!

The Wall People sees Dr. Edwards and Dr. Gabriel from The Giant Spider summoned to the home of fellow scientist Barney Collins. A recluse since the mysterious disappearance of his son eight years earlier, Collins worries his friends with his declaration that he believes an alien force abducted his son and is kidnapping children from all over the world. Their concern becomes fear, however, when they realize Collins might be right!

X: The Fiend From Beyond Space provides examples of:

The Wall People provides examples of: