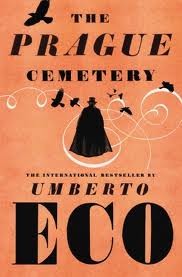 A postmodernist Conspiracy Thriller by Umberto Eco, retelling the stories of many historical hoaxes, humbugs and forgeries - where the most important one is that of The Protocols of the Elders of Zion, which was one of the indirect causes of Jews being a scapegoat for the Nazis during the World War II. Considered to be one of the most controversial literary works published in the recent time because of its faithful rendition of many anti-Semitic statements, the novel is nonetheless highly popular. Its style and plot resembles those of the other novels by Eco, especially Foucault's Pendulum, where Protocols also play an important role.

The main character, Simone Simonini, is an amnesiac lawyer working theoretically as an antiquary and practically as an informant for the intelligence service and a forger of documents. His mind is full of partial memories, racial and religious prejudices and conspiracy theories based on them - and though he is not always sure of the difference between them, he manages to make a decent amount of money by using them creatively. Besides obvious problems connected with his profession he must deal with a nosy priest who has a habit of breaking into his house and leave notes in Simone's own diary, implying that he knows more about Simone's life than Simone himself. Oh, and there is also a cellar full of corpses, a hysteric woman with two personalities, and bunch of cultists worshipping Satan - all that on the background of Franco-Prussian War, the movement of Garibaldi, and The Gay '90s.

The tropes, as regards the novel:

Tropes in conspiracy theories believed in or launched by the characters: