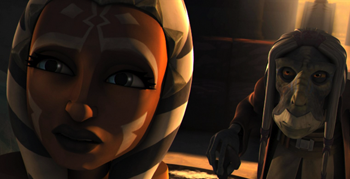 Anakin and Ahsoka are in the slums of Coruscant searching for Car Affa, an arms dealer selling Republic weapons to the Separatists. They arrive at a bar where Affa is hiding, and Anakin instructs Ahsoka to wait outside while he apprehends the fugitive. When the patrons storm out of the bar, Ahsoka is jostled by the crowd and her lightsaber gets stolen. She wants to keep the loss secret from her mentor, so she goes to the library to try and track down the thief on her own, and ends up partnering with an elderly Jedi Master, Tera Sinube, who has decades of experience with Coruscant's criminal underworld.