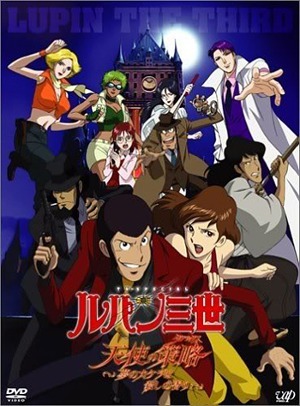 Lupin III: Angel's Tactics (An Angel's Tactics – Fragments of a Dream Are the Scent of Murder) note 天使の策略(タクティクス) ~夢のカケラは殺しの香り~ (Tenshi no Takutikusu ~Yume no Kakera wa Koroshi no Kaori~) is the seventeenth Lupin III Yearly Special. It was released on July 22, 2005 special, and was directed by Miya Shigeyuki, who would go on to direct Green vs. Red.

Lupin's new goal is the mysterious Original Metal, a seemingly alien artifact kept in Area 51 under strict guard. However there's another party who wants to obtain the orb: the terroristic organization known as the "Bloody Angels", composed only of women all of whom are skilled assassins. Soon Lupin and his friends are hunted by Zenigata and his new clumsy assistant Emily O'Brian and at the same time targeted by these deadly ladies aiming for the Original Metal, which has proven too hard to cut even for Goemons' Zantestuken. The major question is whether this is just a series of professional assassination attempts or if the Angels have an underlying agenda...or a personal grudge.