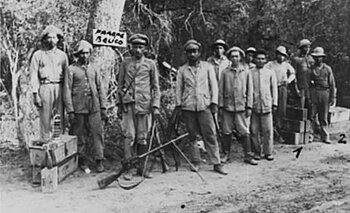 The Chaco War (1932-1935) was fought between the Republics of Bolivia and Paraguay over control of part of the Gran Chaco region, a wasteland with almost no value at all.note A river connecting to the Atlantic Ocean passed through the area, and Bolivia, which used to have a small strip of land that connected it to the Pacific Ocean but lost it to Chile in the War of the Pacific, never accepted the loss of its coastline; it in fact maintains a navy as part of its hope of someday regaining it. Also, it was thought there were rich deposits of oil in the Chaco.

It started when Bolivia invaded part of the territory and fought a Paraguayan garrison. Bolivia had more population and troops than Paraguay, but they countered with a different style of war, a more homogeneous population and intelligence and supplies from Argentina. They were able to seize a large part of Gran Chaco.

Eventually, both sides, unable to keep advancing, decided to end the war. Even though technically Paraguay won, both countries ended up very badly, with many deaths and huge debts to pay. And worst of it all, the supposed oil never existed, making this war completely worthless. However, Bolivia eventually found out that their territory of Gran Chaco had enormous gas deposits for them to export, making them the winners in the long run.

Works dealing with this war: