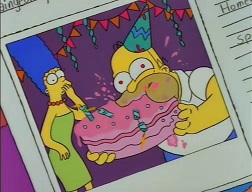 "Reading his essay would only waste valuable seconds."
Advertisement:

Note to TV Tropes Editors editing the subpages: The Simpsons has over 700 total episodes, so in an effort to make the subpages look more organized, each individual funny moment should be placed into the episode it's from under the individual season folders. If there is confusion about what episode was in a certain season, open this page

in a separate tab or window for use as a reference.

And because of the length of this page, it's been split into several different subpages.