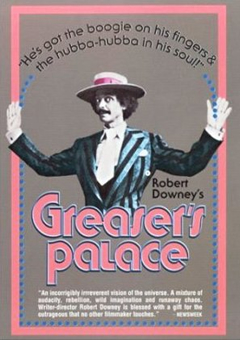 Jesus Christ, zoot suit and all
"He's got the boogie in his fingers, and the hubba-hubba in his soul!
— The movie's tagline, as well as a line from Jessy's big number
Advertisement:

Greaser's Palace is a 1972 B-grade "acid western" movie directed by Robert Downey Sr. The movie is supposed to be an allegory of the story of Christ through the New Testament, starring Allan Arbus as the symbolic Christ, Jessy, who parachutes to earth, and is sent on a journey Jerusalem to become an actor/singer, as per the mission bestowed upon him by the Agent Morris. Also throughout the movie is the titular Greaser's Palace, a saloon of some kind, run by Seaweedhead Greaser, who is in a constant state of constipation, and has a son named Lamy, whom he believes is gay and keeps killing because of it, and a daughter named Cholera, who performs in a vampish manner at the Palace.

Although Downey, Sr. made a career for himself directing low-budgeted (and low-quality) B-movies, this one in particular is just about the highest-budgeted movie Downey, Sr. ever directed in his career (financed at $1,000,000 by a producer who did him a favor). Oh yeah, and this is supposed to be a comedy, if you couldn't tell.