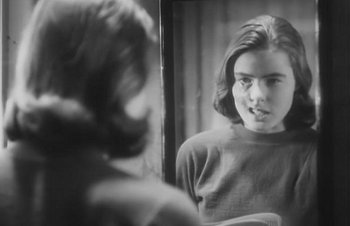 Anna Holm (Bergman) became disfigured as a young girl. This disfigurement has left her bitter; the world has treated her horribly and made her a social outcast. So, she begins a life of crime, mainly blackmailing rich women, caring little and doing little to make people care for her.

But when she has the chance meeting with Dr. Wegert, a plastic surgeon, she decides to go under the knife. However, her life of crime follows her when she becomes involved in a plot to kill a little boy for a greedy young man.

The Swedish film was remade in 1941, starring Joan Crawford.