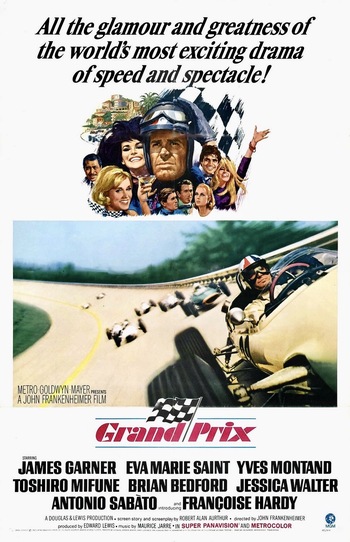 Garner plays Pete Aron, an American driver who is fired by his team after causing an accident that seriously injures his British teammate Scott Stoddard (Bedford). While Stoddard recuperates and deals with his self-doubts regarding his ability to live up to his illustrious brother's reputation, Aron has an affair with Stoddard's wife (Walker) and signs up with Japanese automaker Izo Yamura's (Mifune) team — a new and thus far unsuccessful outfit. Meanwhile, over at the historic Ferrari team, veteran and former champion Jean-Pierre Sarti (Montand) is cynical and burned-out while his teammate Nino Barlini (Sabàto) is a young up-and-coming charger. The unhappily married Sarti also begins an affair with American journalist Louise Frederickson (Saint).

The movie follows these four drivers through the season until the championship comes down to one last race. Aron wins and is reconciled to Stoddard, but it is a hollow victory: Sarti has been killed in an accident earlier in the race and Aron is left walking the circuit alone.

John Frankenheimer peppers what could have been a cheesy melodrama with stunning racing sequences — a combination of scenes filmed during the 1966 Formula One season, stunt driving by some of the top F1 drivers of the day and modified Formula Three cars driven by the actors themselves. James Garner in particular did all his own driving and indeed would often best the "real" drivers in races among the cast.

Several of the characters wear the helmet designs of the drivers of the day: James Garner sports New Zealander Chris Amon's helmet, Brian Bedford wears the tartan stripe of Jackie Stewart and Yves Montand swaps partway from John Surtees' lid to Mike Parkes as Parkes replaced Surtees at Ferrari midway through the season in real life. The "real life" drivers appear as extras throughout the racing scenes, even with the occasional line. In fact, real-life champions Phil and Graham Hill (no relation) were even given minor roles and character names.

The film won Academy Awards for Best Sound Effects, Best Sound Design and Best Film Editing, with Saul Bass providing some memorable graphic sequences with tiled images while the racing sequences were accompanied by no incidental music, rather the loud blare of V8 engines, the squeal of tyres and an excitable commentator.