Recap / Steven Universe S0E2 "We Are the Crystal Gems" 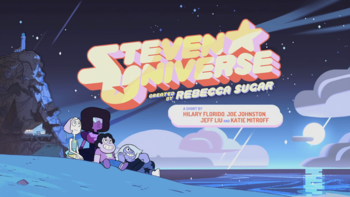 It's years in the past, back when construction has just started on Steven's house so he could live closer to the Crystal Temple. Steven had recently taken up the ukulele and had been learning very quickly, so Greg encourages him to share the song he wrote with the Crystal Gems. Steven is hesitant at first, but starts it up after some encouragement. Garnet starts clapping along and the other two follow.
If you're evil and you're on the rise
You can count on the four of us taking you down
'Cause we're good and evil never beats us
We'll win the fight and then go out for pizzas
We... are the Crystal Gems
We'll always save the day
And if you think we can't
We'll always find a way
That's why the people of this world believe in
Garnet, Amethyst, and Pearl and Steven!

After Steven finishes singing, we flash-forward through the construction to Steven moving in, looking as he does in the present. Pearl is heard singing over bits of his life in his new house with both them and Greg.

The Crystal Gems each show off their glowing gemstone, while Steven's doesn't glow. Cut to all four running on the beach, and Steven falling behind. Their image turns into silhouettes in the foreground of a montage of major events thus-far. When the montage ends, the Gems have changed to their new outfits, and Steven catches up and takes the lead. The music reaches a peak and they all begin singing accompanied by related imagery:

From there the short transfer into the second opening, but with Greg included.

We are the Crystal Gems!
We'll always save the day
And if you think we can't
We'll always find a way
That's why the people of this world
Greg: Believe in
Garnet, Amethyst, and Pearl and Steven!

The short originally aired at San Diego Comic-Con 2015, then on the Cartoon Network website.