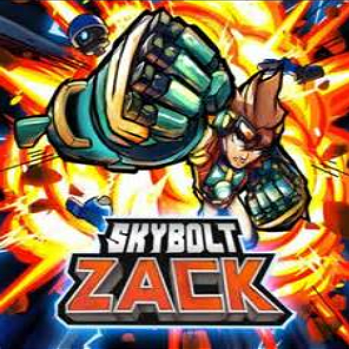 Skybolt Zack is stylish 2D Action Game, developed by DEVS MUST DIE, published by Green Man Gaming and released for PC through Steam and Nintendo Switch on November 7th, 2019.
Advertisement:

The game is premised around a robot army of Dr. Kaz managing to swiftly take over the Earth and even partially shatter it for good measure. The titular protagonist is taken prisoner and experimented on, and given mechanical, rocket-powered fists for some reason. However, it's still judged a failure and he is discarded - big mistake. Now, Zack gets to smash and air-dash his way through an assortment of levels up until he can finally reckon with Dr. Kaz and liberate the Earth.