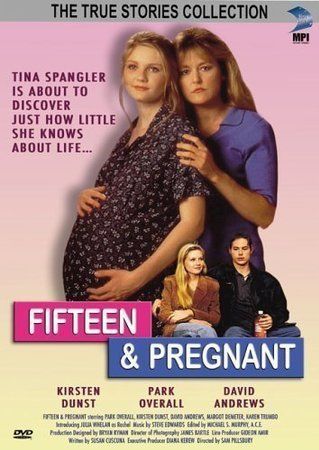 Fifteen & Pregnant
Fifteen & Pregnant (also known as Fifteen & Pregnant: A Nice Girl's Story) is a Lifetime television movie that first aired in 1998 starring Kirsten Dunst, Park Overall and David Andrews. Tina Spangler (Dunst) is an immature young teenager who ends up getting pregnant by her boyfriend, Ray. In addition to this, she and the family, including her younger sister and their kid brother, are also dealing with the fallout of the marital woes of their mother, Evelyn "Evie" (Overall) and Calvin "Cal" (Andrews).

Not to be confused with the MTV show 16 and Pregnant or the 2005 fellow Lifetime film Mom At Sixteen.