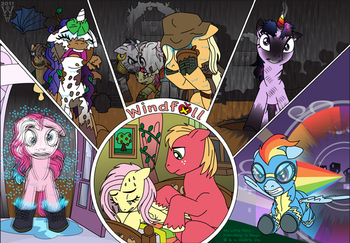 , by Warren Hutch, is a My Little Pony: Friendship Is Magic fanfic that takes place several years after the end of Season One. Twilight Sparkle's circle of friends have remained close, even after they've gone their separate ways: Twilight herself is a graduate student at Canterlot University, Applejack is still running the family farm, Pinkie Pie is engaged to Caramel and still working at Sugar Cube Corner, Rarity's clothing business is booming enough that she's opened a second boutique in Canterlot, Rainbow Dash is a proud member of the Wonderbolts, and Fluttershy and Big Macintosh are happily married and expecting their first foal...

Tonight, if Pinkie's "Pinkie Sense" is any indication. Hilarity Ensues as the old gang scrambles to get the word out and get everypony together for the blessed event, through wind, rain, mud, and other minor disasters.

In Omnibus form, the original 12 chapters bundled into threes, for Fimfiction.net

. Followed by a sequel, Earth and Sky.