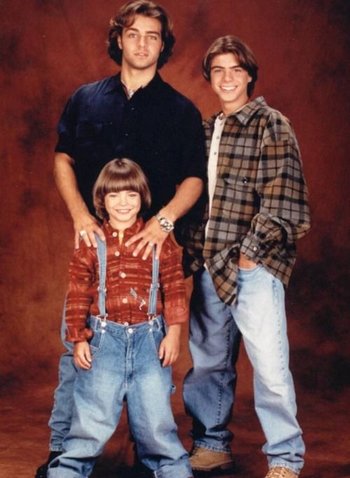 Brotherly Love is an American sitcom that aired for two seasons: it first premiered on NBC on September 16, 1995, and then moved to The WB in September 1996 after NBC cancelled the series following its first season, only for it to be cancelled for good in May 1997.

It started real-life brothers Joey, Matt, and Andy Lawrence playing the protagonists Joe, Matt and Andy Roman. In the Pilot Episode, Joe – a very macho, kinda jerky but overall good guy – arrives in Philadelphia while on a cross-country trip from Los Angeles. The brothers' late father Mike co-owned an auto garage, Roman Customizing, with his second wife Claire (Melinda Culea). Joe, Matt and Andy's estranged older half-brother, comes through town intending to sell his 25% stake in the garage to Claire, but he discovers that the garage has been struggling financially since Claire took over the business following Mike's death in a racing accident. After getting to know his younger brothers, 15-year-old Matt (an eccentric worrywart who deals with the normal trials and tribulations of being a teenager) and 6-year-old Andy (an imaginative youngster who initially often was seen in costume and had quite a few imaginary friends), he decides to stick around and help Claire run the business.

Rounding out the main cast were the garage's two staff mechanics: the intellectual, attractive and snarky Louise "Lou" Davis (Liz Vassey), who develops a Will They or Won't They? relationship with Joe as the series goes on, and lovable oaf Lloyd Burwell (Mike Mc Shane), who often takes others statements in the most literal of contexts and regularly misses other people's points.

The show primarily focuses on Joe trying to adjust to his new job, helping his brothers and his various relationships; secondary storylines (and in certain episodes, both the "A" and "B" storylines) usually focus on Matt, Andy, Claire, Lloyd and Lou (with a combination of the first three featured in one of the stories and the latter two either appearing supplementary to the "A" story or involved in their own story). Although the series lasted only for 40 episodes, the show wound up in syndication from 1997 to 2002 on Disney Channel in the U.S. and Family Channel in Canada.