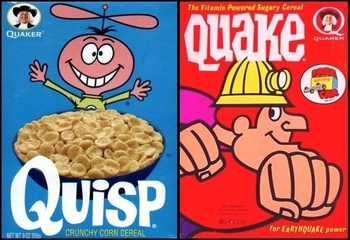 The cereals, practically identical to Cap'n Crunch in flavor, gave each other the gimmick of letting the children decide. Since the cereals had the same nutrients and same flavors, a "rivalry" was created between the two cereals. No matter who won, the company still earned money.

The advertising would have each character shill why their cereal was the best, using special abilities to save the day in some way to prove their cereal was better. Quisp had the power of "Qwazy energy" through his cereal, while Quake's cereal gave him "the power of an earthquake". Depend on who held the lead of the commercial, the other member of the rivalry would try to hopelessly shill their product as better, only to be dismissed by that commercial's lead.

Despite being on even footing, Quisp was the winner of the battle. While the kids liked Quake as a character, his cereal floundered in sales compared to Quisp's. A new honey-based version of the cereal's recipe, along with a much slimmer and cowboy-themed design for Quake was attempted to boost his popularity, but this also proved to not work out. Quake was eventually given a new partner, Simon the orange "Quangaroo", with his original cereal replaced by an orange-flavored one, while Quisp gained a sidekick in the dimwitted Quunchy.

Even with these changes, Quisp won in the end, his cereal being the one to stay. While the cereal was eventually retired, it was brought back in the 2010s, with the gimmick of the "first online orderable cereal", though some specialty grocery stores carried the reboot as well.

The advertising campaigns provide examples of: