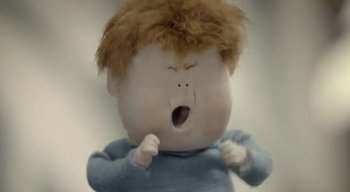 In the years 2012-2014, De Lijn, a Flemish bus & tram service, had a marketing campaign built around a cute and tiny doll. This doll is the stressmannetje ("(little) stress guy", a common term for someone operating under stress) and he represents the stress automobilists experience while maneuvering through the city. The two commercials at the heart of the campaign put him and his human companion in a rapid succession of relatably frustrating, traffic-related situations to which the end message is to leave your stress (the doll) at home by taking the bus. The Stressmannetje has won many prizes and is the most successful campaign of De Lijn to date.

The original 30-seconds long commercial, named "Parkeerstress" ("Parking Stress") on the De Lijn website, was released in December of 2012. It was such a success that a Director's Cut followed in March of 2013 on social media, adding 15 seconds of footage. Exactly a year later, "Parkeerstress" got a 30-seconds long sequel in "Stadsbeleving" ("City Experience"). The Director's Cut, once more adding 15 seconds, was concurrently put up on social media.

There are three more peripheral shorts that were created for specific occasions. The first, from November 2013, reuses and loops the footage of the stressmannetje crying, but adds new lines about him being unappreciated. The short is a response to an episode of Volt, in which the host tested the bus for its advertised comfort and it didn't pass. The host humorously ended the episode by stomping on the stressmannetje. Following the response and the social media storm it caused, the host apologized for his actions. The second short is a commercial for the release of Stressmannetje - Het Spel in April of 2014. And the third, which reuses footage from "Parkeerstress", is a celebration of the Stressmannetje winning at the Effie Awards in June of 2015. This award is given out to notably effective marketing campaigns and the Stressmannetje won because it increased the amount of bus travellers by 15.5%.

Various Stressmannetje products were available during the campaign's run, such as a swear jar specifically to save up for a bus ticket and the stressmannetje's voice was available as download for the GPS. The aforementioned Stressmannetje - Het Spel is a simple mobile Endless Running Game. For seven weeks after its release, the 500 highest scoring players of the week were awarded a key chain dolls of the stressmannetje.

The campaign gained international recognition when shortly after its launch Belgian fans uploaded a 6-second clip of the moment in "Parkeerstress" where the stressmannetje loses his euro and screams in frustration. Said scream reached Memetic Mutation as "Hier Nen Euro," meaning "Here, a euro."

The stressmannetje is a creation by Emma De Swaef, a director & Stop Motion artist. The doll's voice is provided by Bruno Vanden Broecke. The commercials and shorts were produced by Famous while Mindshare organized the surrounding media strategy.