A four-book series that shares elements of pulp adventure, treasure hunt stories, and Stratemeyer-esque investigating/snooping, while attempting to update their tropes to fit modern times and be more plausible. Written by Chris Archer, the series consists of The Secret City, Eye of Eternity, Dead Man's Chest, and The Last Clue. All four were published in 2003.

On his 11th birthday, fifth-grader George van Gelder discovers that Captain Kidd, with whom he shares lineage, has a treasure map, and George happens to come across part of it. After recruiting a group of his friends, George sets out to see if they can find the rest of the treasure. 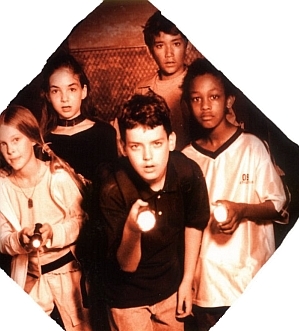 Along the way, they encounter many things they could have never imagined. A massive series of underground tunnels and caves under New York City, a small underground civilization in hiding, a dangerous and violent group of criminal rival treasure seekers led by the mysterious "Leroy", and booby traps placed by Captain Kidd himself centuries ago.

There's plenty of modern day adventure to be had, snooping to be done, and use of modern day knowledge to try to track down an ancient treasure that may or may not exist. There's also the mysterious Paul, who's homeless, knows his way around the dark tunnels but is easily hurt by bright lights, and is a hugely valuable asset to the kids, yet doesn't seem to appreciate their presence. Beyond that, there's also the issue of time — the kids have to make sure they only leave when there's no-one home at George's house, and that they're back home on time. Or the times when they stay up very late at night, including literally into the next morning!

All in a day's work — well, several weeks' work — for this group of plucky 11-year-olds.

Not to be confused with The Pyrates (note the "The").