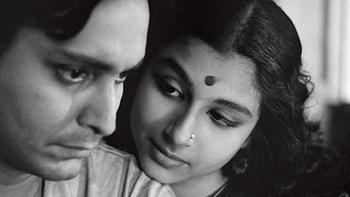 Apur Sansar is a 1959 film from India, directed by Satyajit Ray. It is the third and last film in his famous "Apu Trilogy", proceeded by Pather Panchali and Aparajito.

The film opens with Apu, now a young man, in Calcutta in the 1930s. He is alone in the world after the deaths of his mother and father in Aparajito. Apu is not only alone but dead broke, forced to drop out of school after his mother's death leaves him unable to afford his tuition, unable to even pay the rent on his shabby little boarding house room. He is struggling to make it as a writer when an old school friend invites him to come attend a wedding in the countryside. This spur-of-the-moment casual decision leads to major changes in Apu's life.

Based on the last two-thirds of the novel Aparajito, the previous film in the trilogy having been based on the first third of that novel as well as the end of the Pather Panchali novel. Ravi Shankar provided the music, as he did for the other films in the trilogy.