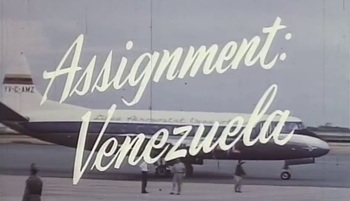 Assignment: Venezuela is a 1950s travelogue picture that extols the benefits of living in Venezuela. An oil company middle-manager is packed off from the USA to go down to Venezuela, and guides show him around and get him acclimated to the culture. Meanwhile, he writes letters home to his family to persuade them that they'll like the coporate housing they'll be in when they join him (and reassure them that he's not getting into any trouble.) An ending occurs that is presented as happy.

This was one of the "lost" shorts of Mystery Science Theater 3000, for a defunct CD-ROM project. It was first exhibited at one of the Conventio-Cons; later on the video was distributed as an extra on the Rhino DVD for The Killer Shrews.