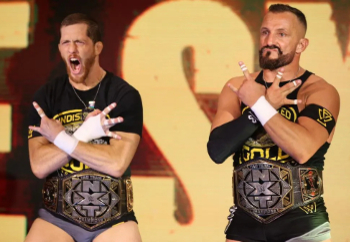 Bobby Fish (full name Robert Anthony Fish, born October 27, 1976) and Kyle O'Reilly (born Kyle Greenwood on March 1, 1987) are a professional wrestling tag team which has been active since November 2012. Initially known for their run together in Ring of Honor, New Japan Pro-Wrestling, and other associated promotions under the name reDRagon, Fish and O'Reilly signed with WWE in 2017, initially making separate debuts on NXT programming before reforming their team alongside Adam Cole to launch The Undisputed Era. Both are currently signed to All Elite Wrestling, once again as reDRagon and reuniting with Cole.

The duo's gimmick is that of arrogant yet dangerous wrestlers with mixed martial arts elements incorporated into their mannerisms and moveset, with occasional sources of humor including O'Reilly's entrance antics and Fish's name. They are 2x IWGP Junior Heavyweight Tag Team Champions, 3x ROH World Tag Team Champions, 1x HRW (High Risk Wrestling) Tag Team Champions, and 2x NXT Tag Team Champions as part of Undisputed Era.* Their first reign was turned into a Freebird reign with their UE teammates after Cole replaced an injured Fish in a title defense and Roderick Strong betrayed Pete Dunne to join them and secure their victory. Later, O'Reilly and Strong would lose the titles, then recapture and lose them again while Fish was still injured. Fish later recovered, leading to he and O'Reilly having a proper second run with the titles. Individually during the duo's run together as a team, Fish is a 1x ROH World Television Champion and O'Reilly is a 1x ROH World Champion.