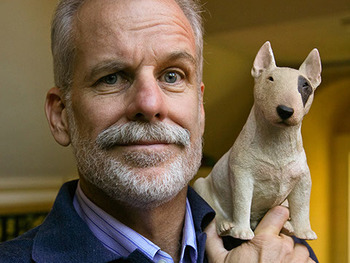 He is most famous for writing Jumanji, Zathura, and The Polar Express all of which were adapted into films.

One of his trademarks is that all of his books have an image of an English bull terrier named "Fritz" (seen in the page image) somewhere in the illustrations, often subtly hidden from readers (sometimes he'll appear as a dog-shaped jar, as a stuffed toy, disguised as a piece of garbage, etc.). Fritz first appeared in Van Allsburg's first book The Garden of Abdul Gasazi, where he kicks off the plot by accidentally wandering into the titular garden—and he's made a cameo in every one of his books since.

His other works include: