Comic Book / What If? 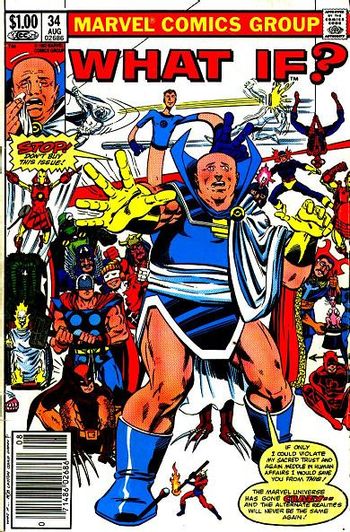 This is the 34th issue, and no, the Watcher is NOT joking.
Advertisement:

What If? is a Marvel Comics series in which each issue explores the consequences of some key event in Marvel history happening differently. These consequences frequently, though not always, turn out to be one of Hilarity Ensues or Anyone Can Die. The series originally ran from 1977 to 1984; a second series ran from 1989 to 1998. It has been occasionally revived in the 21st century for one-shots and miniseries, most often featuring alternate endings to the latest Crisis Crossover.

In 2021, an animated series based on the title premiered exclusively on Disney+, specifically exploring possible outcomes within the Marvel Cinematic Universe. Various actors from the MCU films reprise their roles for the series.

See: What If?, the trope, and What If?, a blog on hypothetical science questions by the author of xkcd.

For the DC equivalent, see Elseworlds.

"I mean, haven't you wondered WHAT IF THE WATCHER WERE A STAND-UP COMEDIAN?"