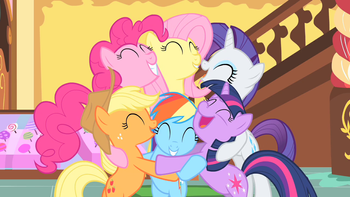 "Do you know you're all my very best friends?"
"I felt it the very moment I realized how happy I was to hear you; to see you; how much I cared about you! The spark ignited inside me when I realized that you all... are my friends!"
— Twilight Sparkle
Advertisement:

Expect a lot of these considering that The Power of Friendship is at the forefront of this show's theme.