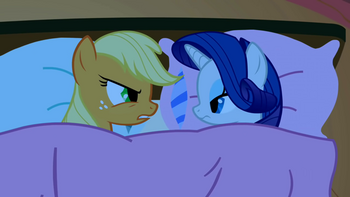 Context: Because without it MLP is a show about 5 lesbian ponies, a pimp named Spike and a pink serial killer.
— YouTube commenter

on a certain scene in "Lesson Zero".
Advertisement:

My Little Pony: Friendship Is Magic has an Improbably Female Cast and is based around close relationships. It was almost inevitable to have at least some Ho Yay, with or without Shipping Goggles.

Note that this page is for likely unintentional examples of Homoerotic Subtext. Intentional moments of romance between canon couples (like later moments between Lyra and Bon Bon from Season 5 onward) are not this trope. They may fall under Ship Tease instead.

Rainbow Dash and Fluttershy, Childhood Friends for longer than any of the other mane six members have even known each other, are frequently shown to be very close.

Rainbow Dash and Applejack's Vitriolic Best Buds routine shifts into Slap-Slap-Kiss on occasions. On a side note, you might notice a trend here with Rainbow... The fact that their voice actress is a Shipper on Deck for them

only adds fuel to the fire.

While Scootaloo and Rainbow Dash are indeed Not Blood Siblings, they seem to be far closer than most biological sisters.
Advertisement:
Twilight Sparkle
Our heroine, in her unending quest for friendship, can get very close to the ponies around her.
Rarity
Rarity with Applejack
Rarity with Fluttershy
Rarity and Fluttershy are the most feminine two from the mane six. They have a lot in common but only a minority of the fandom ships them. Although, there are a few hints that could be referred to as "Rarishy moments".
Starlight Glimmer with Trixie Lulamoon
Advertisement:
Lyra Heartstrings with Sweetie Drops/Bon Bon
Sweetie Drops/Bon Bon and Lyra Heartstrings, two background mares who appear together in many episodes, were widely assumed to be either best friends or a couple. Bon Bon's eyes are emerald and Lyra's eyes are golden, more intense hues of the other's coat, as if to hint each only has eyes for each other. Season 5 is when this becomes Ascended Fanon, with a Running Gag of them acting very romantic while going on about what great friends they are. See the Ship Tease page for these later moments.
Other
Outside show media