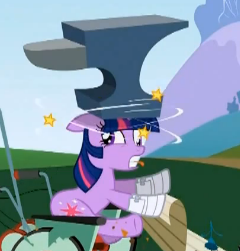 When we heard this show drops a lot of anvils, this isn't quite what we had in mind.
Advertisement:
open/close all folders
The Series
Miscellaneous
Outside-of-universe-but-still-show-related examples such as commercials, toys and other merchandise, outside references and Real Life.