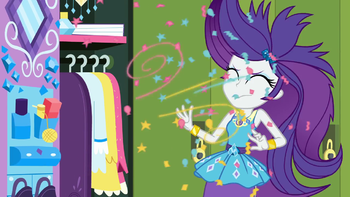 open/close all folders
Better Together (season 1)
School of Rock

It's then very apparent from the impact felt off-screen that it didn't work out, and someone has to drag him away.

Rarity Investigates: The Case of the Bedazzled Boot

Choose Your Own ending (season 2)
Wake Up!