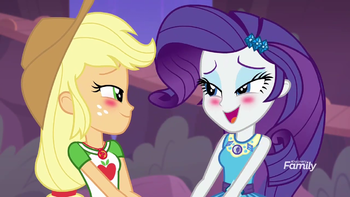 The Equestria Girls spinoff has their tons of Ho Yay, not less than the main show.

See here for Ho Yay page of "Friendship Is Magic".

open/close all folders
Sunset Shimmer
She may have started as a villain, but over the years, Sunset Shimmer has amassed enough Shipping Fuel to rival the main series' Mane Six. While her relationship with both versions of Twilight Sparkle is the most prominent, she still has plenty of moments with other characters. This will probably only be further fueled with the staff stating she's bisexual.

Sunset Shimmer and other characters

Rarity with Applejack
With support from the writing staff, Rarity and Applejack are an arguably even more popular pairing in Equestria Girls than in the main series.
Rainbow Dash
Advertisement:
Misc