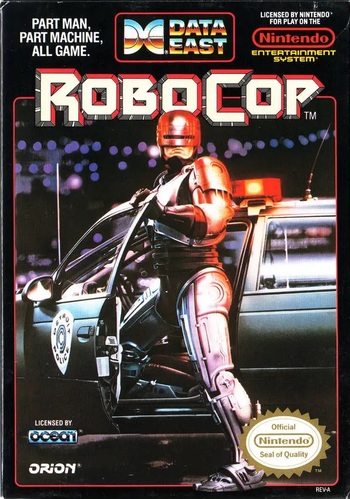 Back in the late 80s / early 90s, when the RoboCop franchise is at it's peak of popularity, Data East managed to obtain the rights to the series. And from there, create a duology of games, based on RoboCop (1987) and RoboCop 2.

Dropping the film's storyline altogether, the games are as much a Pragmatic Adaptation as arcade adaptation goes - the movie's themes of Alex Murphy's losing humanity after being converted into Robocop is dropped for an Excuse Plot consisting of "Robocop shoots bad guys". Gameplay is more or less recycled from DataEast's Bad Dudes a year earlier.

The game is surprisingly a huge success, both critically and commercially. The first game sold over 1 million copies worldwide and is among the 1980s' best-selling home consoles.