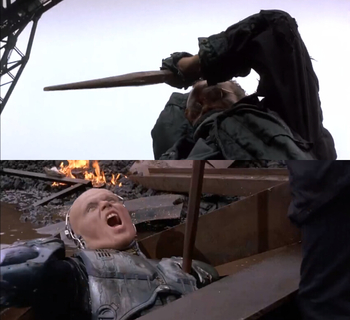 "Sayonara RoboCop!"
"Dick Jones here. I guess you're on your knees about now, begging for your life. Pathetic! You don't feel so cocky now, do you Bob? You know what the tragedy is here, Bob? We could've been friends. You wouldn't go through the proper channels. You went over my head. That hurt. But life goes on, it's an old story, the fight for love and glory, huh Bob? It's helps if you think of it as a game. Every game has a winner... and a loser. I'm cashing you out, Bob."
—Richard "Dick" Jones, Original film
Advertisement:

Old Detroit is an extremely unpleasant place to live, in no small part thanks to these characters.