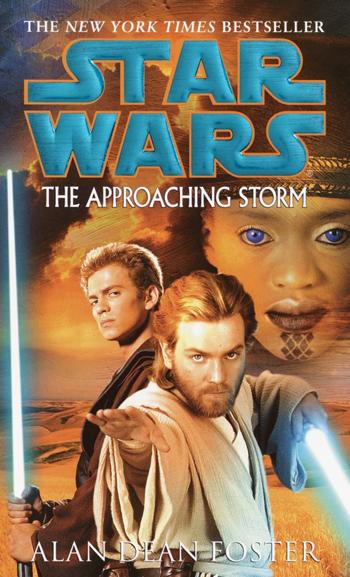 A Star Wars Legends novel by Alan Dean Foster. Labelled as a prologue to Attack of the Clones, The Approaching Storm is the story of the "border dispute on Ansion" that Obi-Wan Kenobi has just returned from dealing with when he and Anakin Skywalker are assigned to protect Senator Amidala.
Advertisement:

Together with Jedi Knight Luminara Unduli and her Padawan learner Barriss Offee, Obi-Wan and Anakin are sent to the tiny but strategic planet of Ansion to resolve a border dispute between the world's nomad tribes and the city-folk that will cause the city faction to secede from the Republic if a compromise is not reached. The reason that the Republic has sent four Jedi to settle a seemingly insignificant dispute is that Ansion is enmeshed in so many treaties that if it secedes, a great number of other Republic worlds will have no choice but to join the Confederacy.

On their quest to broker an agreement between the townspeople and the Alwari Nomads, the four Jedi encounter many obstacles, including ravenous wildlife, several kidnapping attempts and having to provide the entertainment at a banquet in their honour.