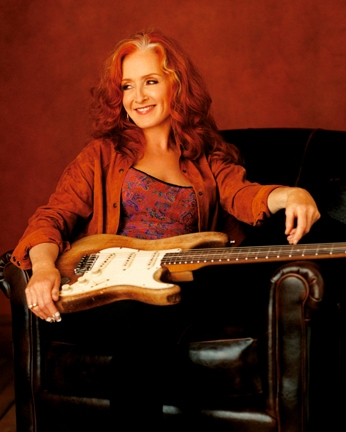 A mighty tight woman, in everything she does.
"I think people must wonder how a white girl like me became a blues guitarist..."
Advertisement:

At the age of twenty, Bonnie Lynn Raitt (born November 8, 1949), the daughter of famed musical theatre actor John Raitt, put a career in the political arena on hold to tour with The Rolling Stones and never looked back.

The Grammy-winning guitar player and vocalist has been a fixture in the music industry since the early 70's, releasing critically acclaimed (if not terribly commercially successful) albums throughout that decade and into the next before a cold streak in the mid eighties threatened to derail her career for good. The self-styled comeback effort Nick of Time did all that and more, not only regaining her critical standing but setting the stage for a run as one of the most popular acts of the early-to-mid-1990s. The 1991 follow-up, Luck of the Draw featured her two most famous songs, "Something To Talk About" and "I Can't Make You Love Me".

Rolling Stone readers voted her to their lists of the greatest singers (50th) and guitarists (89th) of all time.