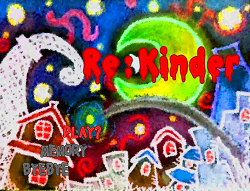 One day, Shunsuke Takano leaves his hometown to visit his grandparents. Upon returning, he finds the place completely barren and ruined, and nobody seems to be around. Fortunately, some of his friends have managed to take shelter in their secret base.

As Shunsuke and his friends try to contact someone, they encounter Yuuichi Mizuoka, a second grader. He reveals himself to be the cause of the town's transformation and invites them all to play the 'Friends Game' with him. If they manage to avoid the traps set in town and defeat the three Mistresses, they win. It is up to Shunsuke to help protect his friends and get them all out alive... and hopefully figure out just why Yuuichi is doing all this.

The English translation for Re:Kinder can be found here

open/close all folders
Tropes found in the original Kinder
Tropes added in Re:Kinder
I… don’t like sand. It’s coarse and rough and irritating, and it gets everywhere.