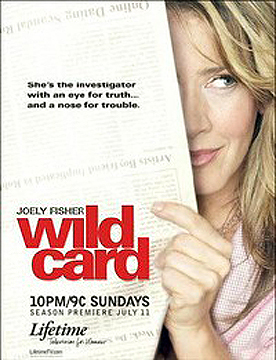 She's the investigator with an eye for truth...and a nose for trouble.
Advertisement:

Wild Card (also known as Zoe Busiek: Wild Card) is a Canadian-American coproduced comedy-drama series. It stars Joely Fisher (who previously played Paige in Ellen) as Zoe Busiek, a former blackjack dealer whose sister Susan is killed in a hit-and-run, leading her to return home, become the legal guardian of her nieces and nephew, and use her skills at reading people and deduction as a newly-hired insurance fraud investigator. It was broadcast in the United States on Lifetime, and on the Global Television Network in Canada from August 2003 to July 2005, lasting two seasons.

Not to be confused with the trope, the comic book miniseries, or the play-by-post roleplay.