Recap / The Legend of Korra S1E8 "When Extremes Meet" 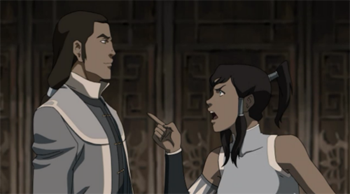 There are a lot of things about me that you don't know.

"When Extremes Meet" is the eighth episode of The Legend of Korra, which aired on June 2, 2012.

Mako, Bolin, and Asami move into Air Temple Island after losing their homes in the previous episodes. Since Chief Lin Beifong has resigned, Saikhan takes her place and says he will bring any issues to Tarrlok. Korra and Tenzin find this suspicious, but Tarrlok says he only has Republic City's interests in mind.

Later, Korra and Tenzin talk to Tarrlok, who wishes for Korra to rejoin his task force. Korra refuses, telling him that she's the Avatar. Tarrlok challenges her statement and reminds Korra that she cannot airbend. As Korra and Tenzin leave city hall, Tenzin reminds her that Avatar Aang had past Avatars to talk to and advises her to meditate on her visions.

In the evening, Asami, Bolin, Mako, and Pabu meet up with Korra, forming the "new Team Avatar". Using one of Hiroshi's vehicles, the team apprehend a group of Equalists.

The next day, Tarrlok persuades the Council, save Tenzin, to pass a law that allows the arrest of anyone "associated" with the Equalists, and imposes a curfew on all non-benders. Team Avatar discovers a crowd of non-benders protesting against Tarrlok for taking out the electricity in their homes. Korra tries to reason with Tarrlok and is ignored because he supposedly believes all of the non-benders are Equalists at a rally. He orders the arrest of Asami for being an Equalist's daughter, and Mako and Bolin for arguing against him.

Korra goes to Tenzin to bail her friends out, but Chief Saikhan cites due process of law, ensuring they and the innocent non-benders won't be freed any time soon.

That night, Korra returns to City Hall to confront Tarrlok. Each compares the other to Amon, and at hearing Korra's retort, Tarrlok attacks her, and a fight ensues. Korra gains the upper hand by destroying the fountain behind Tarrlok and forcing him out of the room. Having run out of water, Tarrlok resorts to bloodbending, able to stop Korra from firebending at him despite the absence of a full moon. He sends Korra flying into a wall and approaches her. Korra has another vision of Avatar Aang, Toph, and Sokka at the trial of the unknown man. Sokka has a pained expression, and Toph is seen trying to attack the smirking individual with metalbending cables but is unable to. Aang struggles to reach the man, and behind him the entire room is also under a strange power.

Korra regains consciousness and discovers she's been tied up. Tarrlok tells her that he is taking her somewhere far away and will never see Republic City again.