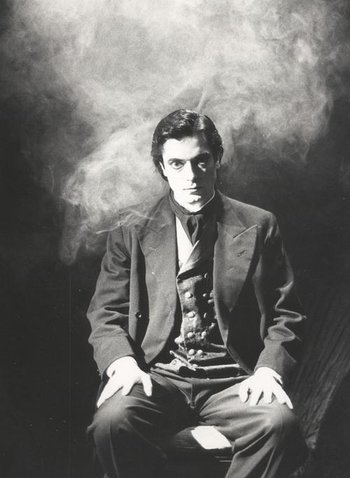 For Mr.Doctor, this is as normal as it gets.
"A man is the less likely to become great the more he is dominated by reason: Few can achieve greatness — and none in art — if they are not dominated by illusion."
—Mr. Doctor, in the advertisement that led to the band's formation.
"This is a painting, not a graphic work."
—Mr. Doctor, on why only one copy of The Mark of the Beast was pressed.
Advertisement:

Not to be confused with the 1936 film directed by Tod Browning which is this band's namesake, nor the 1964 film Devil Doll, nor with the female-fronted American band of the same name.

Devil Doll is a band formed in 1987 by the enigmatic "Mr. Doctor." Their music incorporates many varied styles of music into extremely long compositions. Despite never seeking any kind of mainstream recognition or major label distribution, they have developed a cult fanbase numbering in the thousands all over the world.

After recruiting two separate line-ups for the band — one in Venice, Italy and the other in Ljubljana, Slovenia (then Yugoslavia) — the band's first album, The Mark of the Beast, was recorded in late 1987. A single copy of the album was made, which is owned by Mr. Doctor and the album has never been re-pressed (see second page quote). Soon after, Mr. Doctor began work on a second composition, The Girl Who Was... Death, inspired by an episode of The Prisoner (1967). The band's sound technician, Jurij Toni, agreed to work on the new album, on the condition that there was produced "a painting for him and some graphic works for us." Mr. Doctor agreed to this, and 500 copies of the album were pressed, each with a unique insert made by Mr. Doctor, some with his own blood. Around 150 of these were given to the audience after the second live performance of the album; the remaining copies were destroyed by Mr. Doctor afterward, with the rationalization that everyone who was interested already got a copy. (It was later reissued in various editions, as were all subsequently-released albums.)

In 1989, work began on three new Devil Doll releases: Mr. Doctor Sings Hanns Eisler, featuring interpretations of several of Eisler's works; The Black Holes of the Mind; and Eliogabalus; the latter two were intended to be released together as a double album. However, for budget reasons, Hanns Eisler was never released, and The Black Holes (renamed Mr. Doctor) and Eliogabalus had to be edited down so that each would fit on a single side of vinyl; these two were released as the Eliogabalus album in 1990.

In 1991, the Italian and Slovenian line-ups of Devil Doll were combined. The next album they released was titled Sacrilegium, in 1992. In 1993, the band released The Sacrilege of Fatal Arms, the soundtrack to Mr. Doctor's experimental film of the same name (which in turn was inspired by the video clips the band displayed during shows,) which was a rearranged version of Sacrilegium with around 30 more minutes of music.

Later in 1993, Devil Doll again entered the studio to record The Day of Wrath - Dies Irae. However, the studio caught fire during a mixing session. Mr. Doctor and Jurij Toni escaped — the former unharmed, the latter with some injuries that required hospitalization — but nearly all of the recorded music was lost, except for a single unmixed tape Toni happened to have in his pocket. Mr. Doctor had copies of the unmixed tape, along with the sheet music for the composition, given to the band members, under the name The Lost Tapes. In 1994, Mr. Doctor decided to re-record the album, whose name was now shortened to Dies Irae. It was released in 1996 and to this day is the last Devil Doll record to be released to the public.

Since the release of Dies Irae, comparatively little information about the band exists. It is known, however, that several other albums have been recorded. In 2004, the Devil Doll Fan Club started a mailing action to get Mr. Doctor to release more of Devil Doll's music. Numerous fan letters were collected and bound into a book, titled A Thousand Letters to Mr. Doctor, which was then sent to him. Mr. Doctor responded by giving the fan who started the mailing action his own personal copy of Sacrilegium, along with a unique artwork bearing the word "Astonished."

According to a 2008 magazine interview, Mr. Doctor is still writing and recording music with Devil Doll, but is not interested in releasing it.

Much more in-depth information can be found here

Other albums known or rumored to exist:

See how her hair drifts dreamy and gentle as river grass,
and see the fresh, new mouth,
slashed so neatly beneath her dreaming chin.