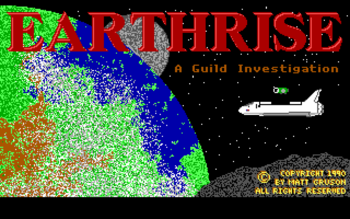 Earthrise: A Guild Investigation is a 1990 sci fi graphic adventure game by Interstel for DOS PC's. In the future, the Terran Mining Guild has lost contact with an asteroid-based mining colony of Solus, which is now hurtling uncontrollably towards Earth. You, an unnamed TMG astronaut, are assigned to travel to Solus, land on its surface to ascertain what has happened, and stop the asteroid on its collision course. Once on the surface, you soon find the base overrun with a variety of hostile alien creatures that have killed the inhabitants, and now you must figure out how to overcome them and survive if you are to complete your mission...

Earthrise is made in a style similar to Sierra's early titles, with blocky EGA graphics, text parser interface, scoring system, and Everything Trying to Kill You at every turn. It remains obscure, but can be played online at the Internet Archive