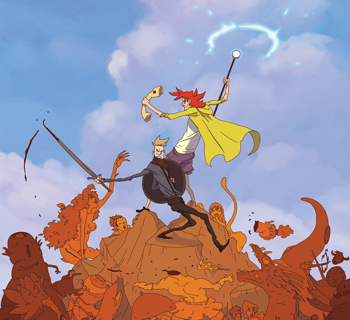 It started with "The Reward", a short animated film that was created by students of the Danish animation school The Animation Workshop as their bachelor project. After its release in January 2013, it went viral within days of going online, gaining a lot of attention on Tumblr and Youtube. This led the group, later taking the name of Sun Creature Studio, to expand the short into a full fantasy universe funded by multiple Kickstarter campaigns.

The series focuses on the fantastic adventures of a group of adventurers, most of whom were inspired or influenced by the journeys of the titular warrior Alethrion. However, Alethrion's legacy is not nearly as heroic as some of them believe, and the things that he did, for better or for worse, will shape the future of their world.

The shorts and series, which can be found here

In 2020, a Kickstarter campaign was held to fund

Tales of Alethrion - An Adventure Board Game!.

Not to be confused with any of the Tales Series of games.

Tropes found in Tales of Alethrion include: